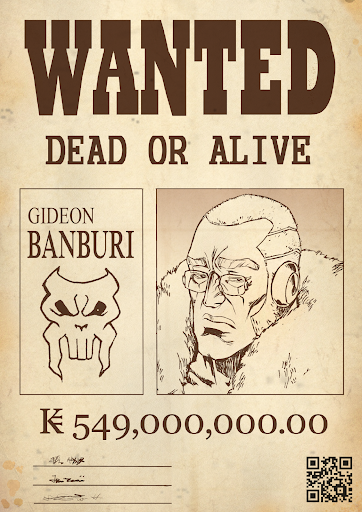 Gideon Banburi: King of the Rebellion

Gideon Banburi is a former Dark Lord of Flairy Crocket, believed to have passed at Ebony Peak, however he mysteriously roams Eden as the king of the Rebellion against Eden and its new regime. NOTE: This photo is from when Banburi was a Dark Lord for the second fellowship of Flairy Crocket. No current photos.

Gideon is a tall sorcerer with albinism, sturdily-built with a very muscular and menacing physique. Gideon has short cut bleach blonde hair and sideburns with dirty gold metal glasses that also covers his nose. He possesses piercing vermilion colored eyes. Gideon looks like he’s in his early 50s.

Gideon Banburi’s wand is one of the legendary Golden wands, Spyjinx, and he has the ability to copy his opponent’s abilities just by blinking at them within a reasonable distance. He can store their ability for an unknown but lengthy period of time. Spyjinx allows Gideon to extend the reach of his sight to steal abilities and it allows him to store up to at least 3 different abilities . In special cases, he can steal it in such a way, the opponent is unable to use their powers. A spell of that magnitude takes a lot of Impulse to cast and so is rarely used as it may also require walls of Impulse to be broken.

Spyjinx is a golden spyglass wand. All of the legendary golden wands are made of gold and have infinite power! They are notoriously rare and so one must beware of fakes. The whereabouts of all the Golden wands are unknown.

Eden has proclaimed Gideon Banburi and his followers a threat to society and cancer to the continent. The Banburi must be stopped at all costs.