US-based digital sports brand Overtime is partnering with the World’s Most Diverse Manga brand, Saturday AM, to bring an original sports comic for modern fans of anime! This partnership will help to promote much-needed diversity within the manga industry and inspires and excites manga and sports fans.

Taking place in Atlanta, stories will be brimming with multi-ethnic characters designed by Nigerian Youtuber Whyt Manga (500K+ followers on Youtube), the artist behind the bestselling Saturday AM manga, “APPLE BLACK.” Meanwhile, the comic itself will be drawn by the talented artist Anthony Chukwudi Iwejuo (10.5K+ followers on Instagram).

The official reveal of the collaboration was announced on Saturday, November 5th, at Overtime Elite Arena, complete with posters, signings, and two thrilling Overtime basketball games! 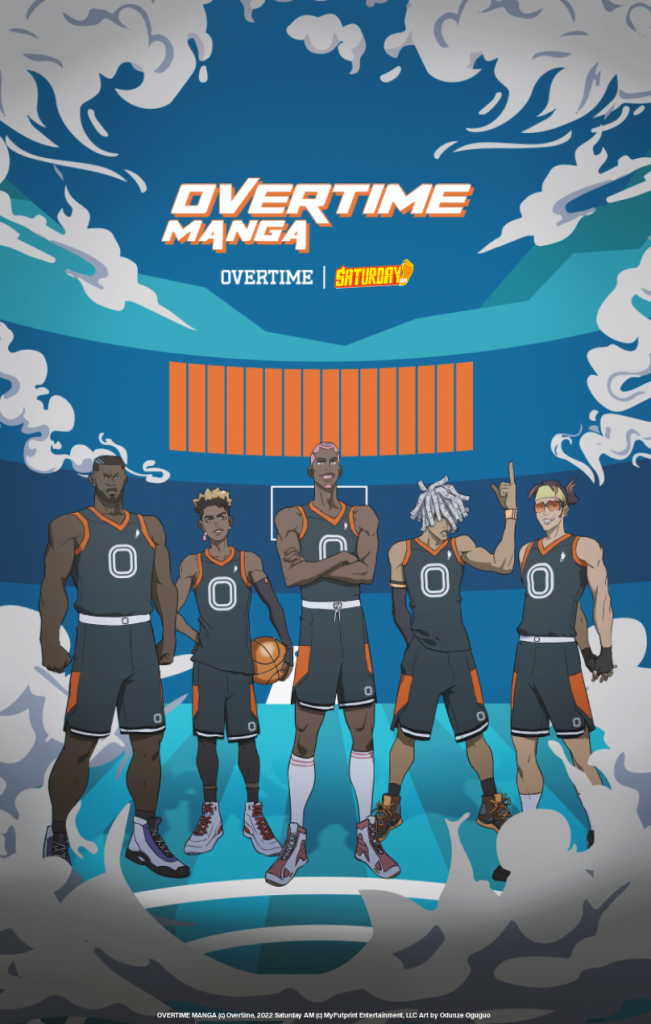 Partnership debuted to a stadium full of joyous basketball and western anime fans in Atlanta!

"Japanese manga has long captivated readers worldwide with its rainbow hair-colored heroes, dynamic action scenes, and dramatic storytelling. We are simply overjoyed that Overtime wanted to work with Saturday AM to normalize seeing more diverse heroes and settings within the captivating sports manga category,"
- Frederick L. Jones, Founder and Publisher of Saturday AM.

"Anime is fusing basketball and culture more than ever before. As Overtime continues to develop IP through comics, NFTs, IRL activation and more, partnering with Saturday AM expands our ability to do more and we couldn't be more excited to collaborate."
- Jack Ostler, Head of Product at Overtime.

Overtime builds disruptive new sports leagues aimed globally at the next generation sports fan and athlete. Overtime owns and operates, OTE in basketball and OT7 in football, and leverages digital-first content across its network of accounts engaging its community of over 70 million fans and followers.

The US-based global brand, Saturday AM, brings together diverse creator-owned series from around the World. Intending to promote more inclusive manga-style comics that feature characters of color and various social communities.

Saturday AM is home to the World’s Most Diverse Manga titles with creators from Nigeria, New Zealand, Senegal, the USA, and more.

Their retail partners, such as Barnes and Noble, Walmart, Waterstones, and AMAZON, have been vital in the manga publisher quickly building a
global retail network of over 24+ countries, a growing number of comic book stores and libraries, and a catalog of 10 manga graphic novels, and growing.

PHOTOS FROM THE EVENT